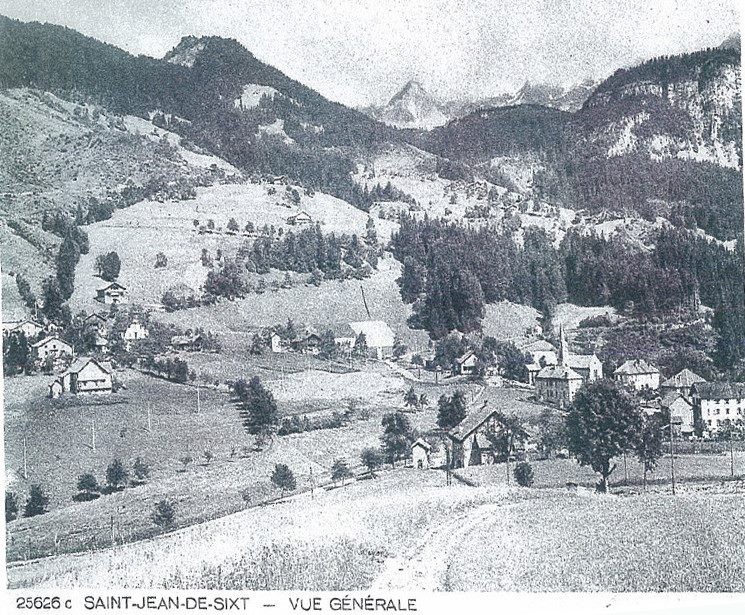 Once upon a time, a small village whose name is originally from the Middle Ages...

Several stone quarries are to be found around the village. Millstones were cut in the rock to produce mills and chimneys.

In the beginning the village was called ‘Les Sits’, from old french words ‘essuit' and 'suit’ meaning an arid exposed area to describe the alpine meadow. Then it was decided to add the name of Saint Jean Baptiste (St John the Baptist) in honour of the patron saint of the village. The name of St Jean de Sixt was born.
In 1861 there were 482 inhabitants, in an area of 1221 heactares, now in 2019 there are 1428 in the same area.

Saint Jean de Sixt has a distinctive characteristic : the town centre moved several centuries ago. Actually, 150 years ago, the route between Thônes and La Clusaz has been modified ; therefore, people abandonned the spot called ‘Le Crêt de Saint Jean’ (Saint John’s crest) in favour of the current place.
From 1868 to 1875 a new church was erected as well as a town hall with a school and a presbytery. Then, the buildings mutliplied in the new village centre.

People talk about the Blissful Pierre Favre (first jesuit priest) born on the 13th april 1506 in le Villaret. He studied Arts and Theology in Paris. He was also a member of the company of Jesus, and taught Theology at university. He has been beatified in 1872 and recently canonized by the Pope François on 17th, December, 2013.

In 1601 a chapel was built in his honour in the hamlet called Le Villaret, which was subsequently destroyed and rebuilt during the french revolution.
To go further :

The Folkloric Group Lou Saint-Jeandais, respect of the local customs and traditions.
All you need is three accordion notes to make you dance. The historic anecdotes and traditionnal costumes of the Lou Saint-Jeandais group will show you the heart of a preserved past.
All passionate of traditions ans stories, the 13 couples and 3 accordionist musicians who make up the folkloric group make the show with passion and humour, and tell you about the life in our mountains, war, love ...
Tweet
Accessibility
Theme:
Text:
Share :
My favourites